I’m currently laying in bed next to our beautiful little baby boy, Micah Jonathan. He was born last night, and now I’m going to write my final birth story.

**Warning, following is the birth story of our little Micah. There is some typical birth-style graphic content.**

Well, first of all, our birth journey – like all journeys – didn’t start here. It started 9 months ago when we discovered that we were expecting a surprise baby. That was the start of an emotional 9 months, filled with all sorts of trials and triumphs. (You can read more about it by clicking on the “About Me” link above)

These past few weeks were especially challenging, with a trip to Colorado, increasing pelvic pain, and sheer exhaustion from not getting very solid sleep. As my due date approached, I found myself thinking and praying often that the Lord would bring this baby close to his due date (May 22nd), and not 2 weeks late like his big sister was. When this day came and went, I decided that the weekend would be perfect – Mark already had an extra day off of work for Memorial Day. But alas, the weekend came and went too.

Once again, I found myself second-guessing things and grappling with trust. What if he was late like his sister? Would the birth go okay? Why was God “pushing the limits” of what I felt I could handle?  I lingered in the land of doubt and worry for most of the weekend. Monday evening, Mark and I took the kids to the aquarium, which was a good diversion – and even more, it was a lovely evening of focusing on enjoying the children I already have, which we all really needed.

In the middle of the night Monday, I awoke to contractions. They were eventually strong enough to get me out of bed, but then spaced back out and I went back to bed to awaken with nothing. Tuesday morning in my quiet time with the Lord, I took some time to try to realign my thoughts with His, remembering that He was watching over both Micah and I and would bring about labor in His time. That night, the same thing happened as the night before, only the contractions were stronger.

Wednesday morning I continued having contractions, but very far apart – every half hour or farther. I knew things were progressing, but figured it was going very slowly and started looking forward to my ladies Bible study that evening. But first, I decided to mow the lawn. 🙂 And we don’t have a power mower either – it’s a reel-style! I finished the lawn around 4pm and the contractions had picked up in frequency quite a bit. At that point, I figured it was probably just due to the exercise and waited to see if things continued. Around 5pm, I could tell that the contractions weren’t letting up, so I let Mark know how I was feeling (he was home) and started cleaning up around the house.

At 5:30, I began timing contractions and making last-minute preparations to our birthing space (master bathroom). They were around 5 minutes apart. Over the next hour, the contractions increased in intensity and became 2-3 minutes apart. I checked his heart tones, and they were good – around 140bpm. I filled the tub, and Mark got the kids settled with dinner and a movie, telling them baby Micah was on his way.

At 7:05pm, I got into the tub, which felt amazing. Seriously – water birth (or even labor) is so relaxing! After about 10 minutes, and a couple of longer breaks between contractions (which I desperately needed!), I started feeling a slight urge to push. I know that this is the final part of first stage, as the body is transitioning into the pushing stage, and I kept telling myself that I was almost done. It was hard though – the pain was intense and the anxious feelings of transition are near impossible to ignore.

I finally started pushing around 7:25, and it was a bit different than previous labors. I didn’t really have strong urges to push with defined contractions. It was more like a constant need to push, and I did as much as I felt I could without risking tearing. As I was pushing Mark noticed that his bag of waters was broken, but I had no idea when it had occurred. His head was born, then his body just a couple of pushes later, at 7:40pm. Mark supported my perineum as best as he could and caught Micah, lifting him immediately above the surface of the water (all while leaning over the edge of the tub because things went so fast he couldn’t get in!).

Both of us were immediately struck by how blue he was. Most water babies are a bit purple, or even blue in the extremities, but he was blue everywhere. We immediately set to work trying to get him to breathe, rubbing his back and soles of his feet, and warming him up. He had a very short cord, which made things especially tricky. After a couple of minutes, we decided to get him out of the water, so Mark helped me out and we resumed simulation. We sucked out his noise and mouth several times and kept rubbing his back. He was breathing, but not regularly, and slowly pinking up in his torso. I then delivered the placenta, which went smoothly with no hemorrhaging, praise the Lord!

About 20 minutes after he was born, he was almost entirely pink, and things were stable enough that we called the kids up to meet their new baby brother. What a sweet time that was! They were all so excited to meet their brother and see this little guy that we have been waiting on for so long!

Around 8:45pm, we cut our little guy’s cord and nursed for the first time, which he loved. His cord was short – only 17 inches or so, which might explain why it took so long to go into labor (that happened with Avigail too). Since then he’s been doing great! Loves to nurse and snuggle and had a few periods of wonderful alert time today.

We also chose Micah’s middle name today. Name meanings are very important to us, and this is what his name means:
Micah- “Who is like God”
Jonathan- “God has given”
We chose Micah because of the nature of our surprise pregnancy and it’s reminding us of the sovereignty of God, and we chose Jonathan because he is absolutely a gift to us!

But most of all, I’m thankful for the ongoing lesson of trust that He is teaching me, and pray I can pass this on to my children. Our God is so good, His love for us is never-ending, and He wants to give us good! But so often we don’t know ourselves what good really is, and that is where trust comes in.

Many blessings to you on whatever road the Lord has you on, and may you find trust and peace on the journey! 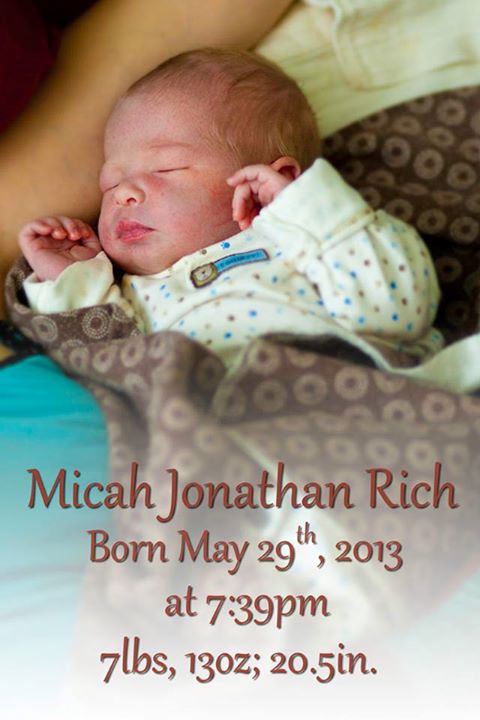 2 comments on “Introducing Our New Addition!”